Influencing the Incorporation of the UNCRC into Scots Law

Who Cares? Scotland has campaigned to better protect the human rights of Care Experienced people for many years and has worked collaboratively with many other organisations to push for much stronger rights protections in law. As a provider of Independent Advocacy, we work with Care Experienced people to support them to have their rights realised every day and as a result, we know that being in care can mean that rights are not always respected.

The incorporation of the United Nations Convention of the Rights of the Child (UNCRC) into Scots law is a historic moment for children’s rights in Scotland. Today we see the Stage 3 debate in Scottish Parliament take place on the United Nations Convention on the Rights of the Child (Incorporation) (Scotland) Bill. This is the final stage of scrutiny for this new law and it brings with it both preventative and remedial measures to respect, protect and fulfil child rights, meaning  that soon, these rights will have real power in the courts and public bodies will be supported to embrace child rights in the delivery of their services in Scotland.

Our journey in supporting incorporation of the UNCRC in Scotland spans several years. Below we have detailed some of the key moments in that journey and how our Care Experienced members have been crucial in influencing this change in the law.

Supporting the movement for incorporation, 2018-20

In September 2018, members Ryan McShane and Alicia Santana travelled to Geneva to take part in the United Nations Day of General Discussion. In Ryan’s speech to delegates about what it means to be a ‘Human Rights Defender’, he spoke about the importance of UNCRC incorporation and why Care Experienced people needed rights protections. A couple of months later, Ryan spoke again about the importance of incorporation, this time in the Scottish Parliament by sharing his experience of the Day of General Discussion and directly calling on the First Minister and the Scottish Government to incorporate the UNCRC without delay:

‘The preamble to the UNCRC states that, with all the rights inside properly respected, protected and fulfilled, we should all grow up in an atmosphere of love, happiness and understanding. People in power have a duty to make sure that this is a reality for children and young people.’

Ryan’s powerful speech in the parliament in 2018 was referred to 3 years later, by MSPs in the Scottish Parliament, as part of the Stage 1 debate of the UNCRC Bill held in January of this year. It was recognised as vital in growing momentum across Scotland to push for incorporation of children’s rights, especially with the potential impact of Brexit and review of the Human Rights Act 1998 on the horizon.

In March of 2019, we signed a joint letter led by Together – the Scottish Alliance for Children’s Rights addressed to Maree Todd, the Minister for Children and Young People. This letter called for incorporation within the current parliamentary term and showed broad support across civil society for this much needed law.

In August of that year, the Scottish Government launched public consultation on incorporation, asking for views on what a new law could look like. We responded to this consultation by fully supporting the creation of a new law to make UNCRC rights real in Scotland and emphasised the potential impact that new rights protections could have for Care Experienced children and young people, as the UNCRC had already been influential in pushing for changes to the care system:

‘It was the intentions of the UNCRC rights, which supported 21 of our Care Experienced members to push for the care leaving age to be raised within the Children and Young People (Scotland) 2014 Act process, and provide stronger provisions through meaningful corporate parenting duties, as well as the extension of aftercare support which should now be provided up to the age of 26. We believe that with full incorporation of the UNCRC, the possibilities to improve the lives of children and young people through legal challenge and raising understanding of the universality of human rights will continue to allow Scotland to create progressive changes.’

On the 30-year anniversary of the UNCRC, in November 2019, the Scottish Government committed to incorporate the convention into Scots law before the end of the current parliamentary session in 2021.

In 2020, Who Cares? Scotland launched a new Annual Participation Programme, which creates opportunities for members of Who Cares? Scotland to share their views about important topics, to make sure they can influence changes in law, policy, and practice. As part of this work, over 80 members shared their views on Child and Human Rights. This involved national and local online workshops and an online survey, with partners such as Together – the Scottish Alliance for Children’s Rights who supported us to deliver these. The findings were shaped into a report called ‘Navigating the World of Rights’ and shared on world Human Rights Day with key decision-makers, including the Scottish Government. 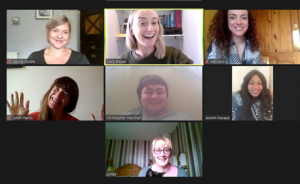 In September 2020, the United Nations Convention on the Rights of the Child (Incorporation) (Scotland) Bill (the Bill) was introduced to the Scottish Parliament. The Equalities and Human Rights Committee was given responsibility for scrutinising the Bill before it could become law, which involved asking for the public’s views again.

During Stage 1 of the Bill, we submitted written evidence to the committee, which was directly informed by the views our members had shared with us that summer. We asked the committee to consider the unique challenges faced by Care Experienced people in accessing justice and in having their rights realised through formal processes, like using the courts or making formal complaints. This included emphasising how important access to independent advocacy is in the protection of rights.

We then provided oral evidence to the Equalities and Human Rights Committee about the Bill. Our Policy Manager, Carly Elliott, spoke in more detail about our member’s views and her answers to questions from MSPs were shaped by our advocacy knowledge and strengthened by member’s voices, such as this quote she shared when discussing barriers to realising rights:

Care Experienced members of Who Cares? Scotland also met directly with MSPs from the Equalities and Human Rights Committee about the UNCRC Incorporation Bill. They represented what we had heard from our wider membership about the need to protect children’s rights and some of the barriers Care Experienced people can experience in challenging rights abuses.

As 2021 began, we signed a joint response to MSPs ahead of the Stage 1 debate. The UNCRC Bill passed Stage 1 and Who Cares? Scotland’s evidence was mentioned by MSPs throughout the debate, with specific mention of Ryan McShane’s work. Throughout the next couple of months, as the Bill made its way through Stage 2, we worked with partners to lobby MSPs and the Scottish Government to create changes to the UNCRC Bill to improve how it supported UNCRC rights to be realised. Many of these positive changes were accepted, including referencing the importance of advocacy in protecting, respecting, and fulfilling children’s rights.

Today we see the UNCRC Bill enter its very final stage before becoming a law, as it will be debated for the last time by the Scottish Parliament in Stage 3. After it passes, the law will need to receive ‘Royal Assent’ and the powers will come into force 6 months after that.

In every stage when influencing MSPs and the Scottish Government about what this new law should look like, we could point to clear evidence from our members about how strongly they felt about Care Experienced people’s rights needing promotion and legal protection. We would like to thank all our Care Experienced members who shared their views with us and helped push to make this historic change in the law possible.

With thanks to Scottish Local Authorities, funding partners and donors who make our work possible.